Make sure you have placed your order for your child's landscape calendar art. This closes on Monday the 28th of September. Details for ordering are on the form that came home.

Many thanks to those who have sent back health profile forms. We are looking forward to the remaining 40 coming to school tomorrow. Spare copies were handed out today, for those who had lost theirs.

We have had a number of issues with Rubik’s Cubes going missing in our hub. As a result, we have made the decision to ban these. Please ensure these are not coming to school.

A HUGE congratulations to Zoë Clarke and Max Graham for competing in the South Zone Speech Competition on Monday evening. Both students did a fantastic job presenting their well-written and entertaining speeches. Max placed 2nd in the Year 8 category. He had the audience in stitches at his personal storytelling. Well done to you both!

It was a glorious day to be out playing sport today for our hockey and netball teams who qualified to represent our kura in the Canterbury Winter Tournament. Many thanks to Jules, Miranda, Anna and Nic who managed the teams and to Maddi, a former student who reffed the netball games. The adult helpers were full of praise for how well the children played and for how they conducted themselves at the tournament.

All going well with the weather, I am hoping to have a good go at finishing the sport shed mural on the second Tuesday of the holidays, in the afternoon. If your child is keen to help, please send me an email and I will confirm times.

Posted by nickydunlop at 20:09 No comments:

Many thanks to the families who have already filled in our phones at school form. We need everyone to complete this, even if your child does not have a phone. Please click here if you are yet to complete the form.

Many thanks for letting us know your views on camp going ahead at Level 2. The vast majority of whānau were very keen for camp to go ahead in Level 1 or 2, so that is what we are going to do. If we, or the Dunedin area, ends up in Level 3 then camp will be cancelled. Our fingers are crossed that this will not happen.
We are currently working on two programmes for camp, a Level 1 and a Level 2 programme. Most activities can happen for both options.
The cost of our week long camp in Dunedin / Waihola is well over $300 per child. With a grant from the Southern Trust and considerable fundraising, this cost has been reduced to $170 per child. This amount will be on your statement that will be coming out very soon.
Coming home this week will be a paper copy of the gear list and a health profile form. Please get the profile form back ASAP.

Last Friday, we submitted our Showquest video. It was amazing to see all the hard work come together in a video that the children can feel very proud of. On Friday there is the option to watch our region’s entries online as part of a virtual show. Please see the following information for how to access this. We will be streaming the videos here at school for the children to see.
Your video will be hosted online as part of a free digital regional show. These videos will go "live" at 10am September Friday 18th, with regional judging announced after the weekend on September 21st. We encourage you to try and watch your show video with your Showquest crew if you can, and to watch and support each other's creations! The "live" video for Canterbury will be posted here - https://www.facebook.com/events/720456411865591/ - so share this link with your community and click "Going" to get updates. If you're not on Facebook you are also able to find the live shows via our website from 10am September 18th.
You'll be able to watch shows from all other regions too - take a virtual trip around Aotearoa to check out talented tamariki all over the country!

Today the Koru Games teams competed in a volleyball tournament at Hillview. For many this provided their first competitive volleyball experience. It was awesome to see the teams go from strength to strength each game, their confidence building and their skills improving. There were many close and exciting games. The children were a delight to take to this tournament and demonstrated self management and good sportsmanship. Our teams finished 6th, 7th and 13th overall.
Special mention goes to the following children who received medals for fair play and sportsmanship:
A huge thank you to Nicola and Anna for their support with this event today.

On Friday we will still be at alert level 2. This means that Canterbury Winter Tournament can not go ahead as planned. This affects our A grade netball and hockey teams. Primary Sport Canterbury are considering a postponement date of Thursday the 24th. We will let you know if this goes ahead.

Tomorrow, about half our hub is involved in a fun mini tournament with St Martins, playing ultimate frisbee, touch and football. This was arranged after Koru Games was cancelled to give the children a chance to have the tournament experience. This will be held at Beckenham Park and will go from 9 to 12:30.
Children should bring a Beckenham Sports top if they have one.
Footballers will need shin guards and football boots.
Posted by nickydunlop at 17:29 No comments:

We need to create a list of children who bring cell phones to school and would appreciate all Year 7 & 8 families completing this short form.

Posted by nickydunlop at 19:16 No comments:

The latest victim on our current Level 2 status is Cantamath. We heard yesterday that this event will be cancelled. The children who attend maths club had been working hard towards the teams event and the creativity, precision and maths content in many of the Cantamath projects are evidence of many hours work. We know there will be lots of disappointed children. This morning we have marked all of the Cantamath projects and decided which work we would have sent through to Cantamath and what we believe would have earned a highly commended or excellence award.
Work by these children would have been sent to the Cantamath competition, had it gone ahead:
Abby, Ava, Ben, Caleb, Connor I, Cooper, Devina, Erik, Eva, Fergus, Frances, Grace H, Henry M, Holly, Ilia, Isla, James, Kate, Layla J, Layla W, Lexi, Lurandt, Mac, Mahli, Marcellus, Meara, Mia, Morgan, Rosie, Ruby, Tabea, Thomas, Walter, Zara M, Zoë C
We have given these children a highly commended award:
Holly, Meara, Henry M, Ava, Grace H, Erik, Eva and Lurandt
The projects completed by these people were of a very high standard and we have awarded them an excellence:
Devina, Ruby, Caleb, Abby, Kate, Zoë C, James, Mia and Mac
All Cantamath projects are currently on display in Sth Hangere - the building that is closest to the old dental clinic by the river. You are welcome to come in and take a look between 8:30 and 9am or 3 and 3:30pm this week.

We are now collecting phones in a tub each morning and sending them to the office for safe-keeping during the day. Since we started doing this a week ago, there are less phones being handed in. Here is a photo of the tub today. If your child brings their phone and it is not in the tub photo, please have a conversation with them about following this rule. If you think your child would benefit from a daily reminder, please let us know. 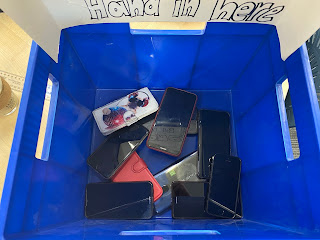 Tuesday 15th September
The three Koru Games volleyball teams will be playing in a one day tournament at Hillview Christian School.
Meet: 8:00 in the Kauri Hub
Children should be dressed in a black BTKP polo top
Children need:
There will be an optional after school practise on Monday next week where we will be joined by some Year 9s and 10s. This will go from 3:15 until 4:15. If children need to leave early for other after school commitments, that is fine.
This event will go ahead in Level 2

Wednesday 16th September
Children who wanted to participate will play in a fun focused one day tournament with St Martins in the sports of football, ultimate frisbee and touch.
This is being held on the Beckenham Park.
This event will go ahead in Level 2, weather permitting.

Jule’s hockey team and Anna’s netball team from weekly winter sport have qualified to play in the Canterbury Winter Tournament.
Hockey - Nunweek Park
Netball - Hagley Netball Courts
Meet: at school at 9:00
Children will be travelling to these venues by car. If you are able to support by providing transport, please email Jenny.
Children need:

We would like to acknowledge the following children from our weekly enter sport programme. Our adult coaches were asked to select a person from their team for each of these two awards.
Most improved Player - recognising children who showed coachability by taking on feedback and putting exceptional effort into improving their skill level over the course of the season.
Mia, Mila, Tabea, Eddie, Eli, Sachit,
Sportsmanship - recognising children who showed exceptional respect for their opposition, their ref and encouragement of their team.
Henry M, Eva, Lurandt, Syesha, Olive, Layla W
All coaches commented on how difficult it was to choose three awards. We recognise the commitment and effort that all children have demonstrated over the season.
Posted by nickydunlop at 17:29 No comments:

Those in Year 8 who have enrolled at Cashmere High School for next year would have been contacted by Cashmere about the testing day this Thursday. Children arrange their own way to and from Cashmere for this testing morning. We expect to see at children back at school by lunch eating time, 1:20, when we take the roll. This will provide ample time for those who will be walking to get back to school.

We are waiting to hear from Cantamath about whether the competition will be going ahead this year. It is scheduled for Sept 16th, when we will still be in Level 2.
We were blown away by the project work that came to school on Friday and are looking forward to seeing the remaining work (for those who asked for an extension) arrive on Monday. We will be setting up a display of all work for the school and parents to view on Tuesday and Wednesday.  I am in the process of confirming the venue for this display.
Below are a selection of the projects that were handed in on Friday ... 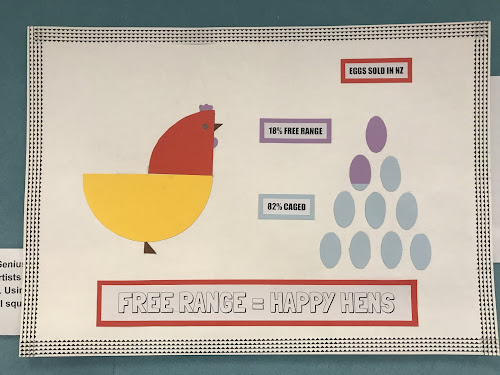 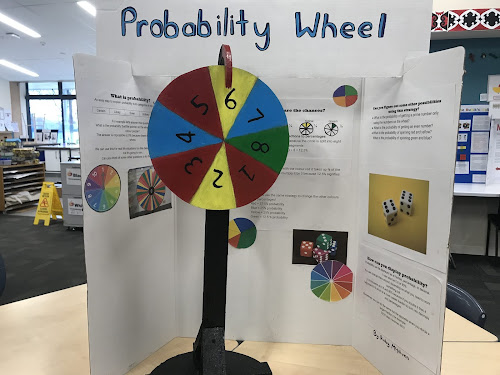 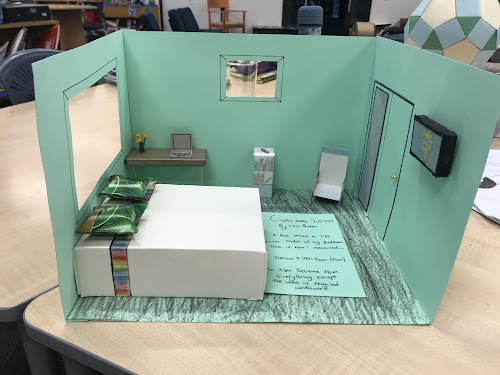 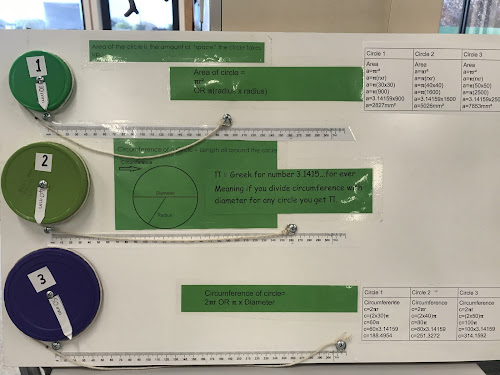 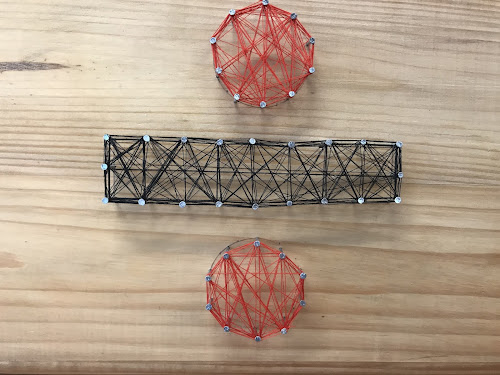 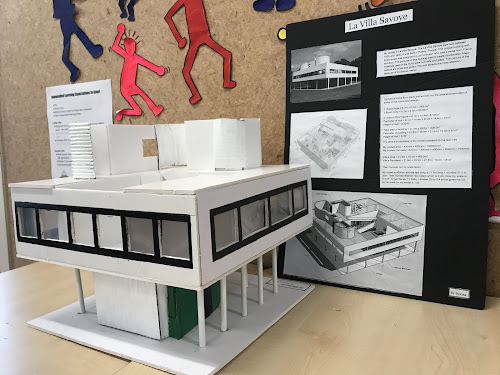 Many thanks to Jaana, Anna and Renata for helping us with our cheese roll making last Thursday. The children love this authentic learning experience. It is a great way to live our school value: 'We get there together'. 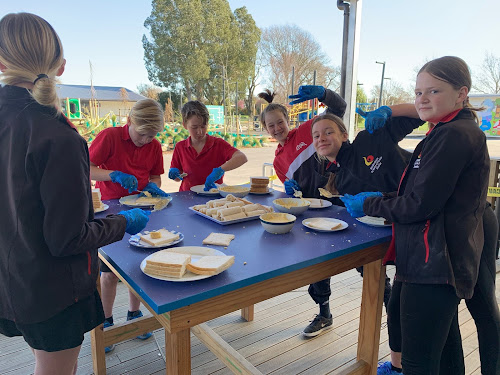 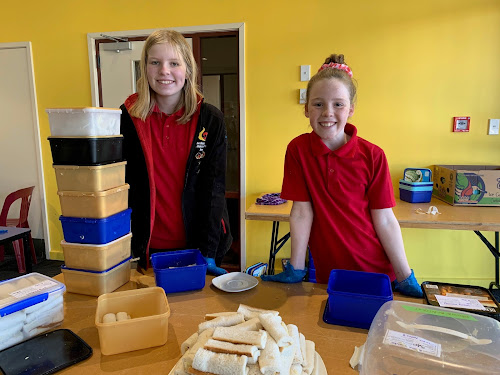 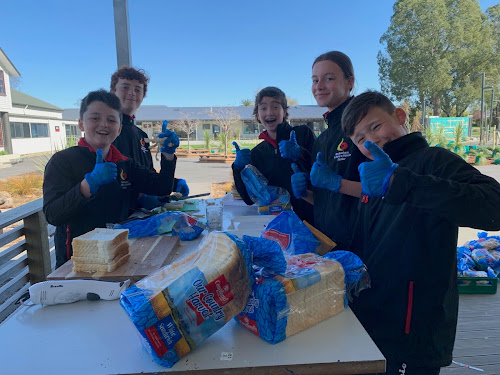 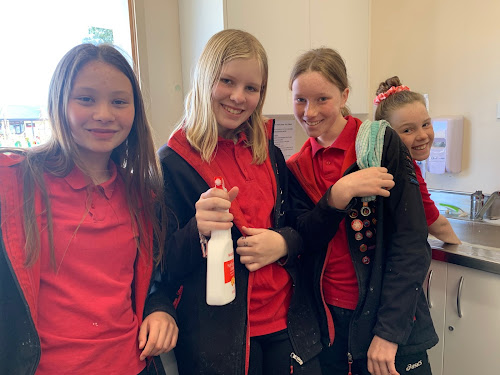 We have recently started an integrated literacy topic about elections. Last Wednesday we held a mock parliamentary debate in the hall. The PM was in attendance (The Hon Jenny Diggle) and the speaker of the House (H Elliott) controlled the debate. There were numerous speakers who provided eloquent, thought provoking and amusing arguments, both for and against the bill. Following 30 minutes of debate, the bill went to the vote. The results were 67:30 against the bill, so the voting age will not be lowered to 13!
This week the children will be forming their own parties and writing policies with a school, rather than country, focus. 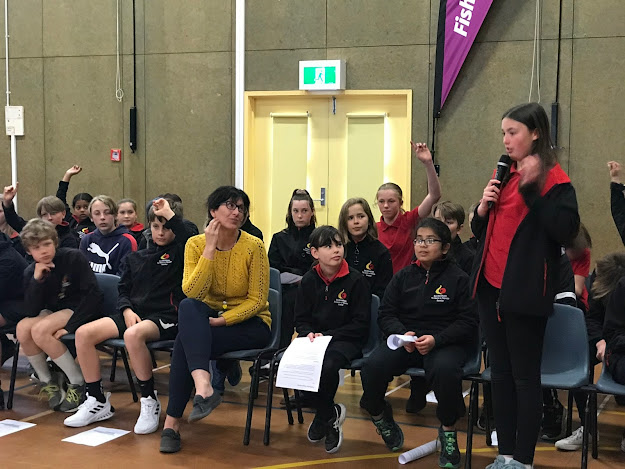 Posted by nickydunlop at 16:23 No comments: